Friends of Football has inducted long-time administrator, football writer and publisher Terry Hobin to its roll of Medal of Excellence holders.

Hobin was surprised with the presentation of his medal at his retirement function in Auckland, after relinquishing his role as manager of the Lotto NRFL in late 2020.

Hobin becomes the 9th recipient of a Medal of Excellence.

In presenting the medal, Friends of Football chair Earle Thomas explained why Hobin was an ideal recipient:

“Every year since 2013, Friends of Football has recognized the achievements of heroes within our game by presenting them with our Medal of Excellence. 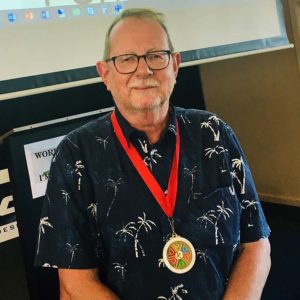 “Due to the nature of today’s function, I don’t need to take you through all the steps of Terry’s career and his contribution to the sport, other than to say we benefitted from his skills, passion and commitment in the days he was a driving force behind Soccer Express in the 1980s and early 1990s.

“His skills as a writer, photographer and publisher – and his people skills – made him extremely suitable as an administrator who has given us two decades as a competition manager and, more recently, as the manager of the Northern League … a competition in which he once played!

“I know I don’t have to do much to convince all of you why Terry is such a perfect recipient of our Medal.

“But I will remind you that our judging criteria considers three things: The impact of their contribution to the sport over a long period of time; Our belief that their achievements can inspire others to follow their example; That overall, our ongoing list of honorees is representative of the ways in which people can influence the success of our sport.

“Terry will join a select group of medalists, all of whom have met these criteria.

“Terry, you are in good company and we hope you’ll accept our medal – and thanks – with much pride.

“We’re delighted to honour you.”