Top footballers with international experience are playing for the Friends of Football All Stars in an effort to encourage up-and-coming youth players.

After a hiatus forced by COVID-19 restrictions in 2020, the All Stars are aiming to play at least half a dozen games against Auckland high school teams in 2021.

How the All Stars started

The Friends of Football All Stars – which include former All Whites and age-group internationals – began playing exhibition matches against Auckland high school teams in 2019.

The All Stars won their opening game 7-2 in an entertaining game against Westlake Boys’ 1st XI. They followed up winning a 6-5 thriller against St Peter’s College, Auckland.

Photographs from the All Stars’ 2019 games (click on image to open to full size): 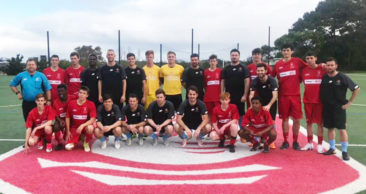 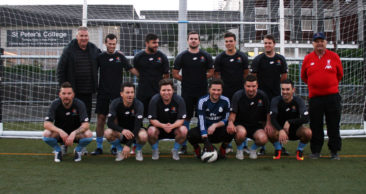 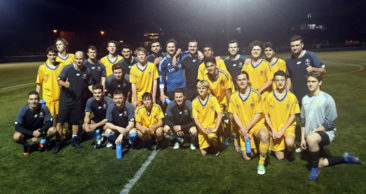 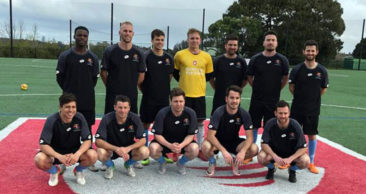 The games gave high school players the chance to test themselves against top players, and post-game feedback was that the experience was inspiring for the young players. As a result, the All Stars plan to play at least half a dozen fixtures each year.

The All Stars are a squad of players who have all played at a high level in the game and who want to give back to their sport by playing up-and-coming youth players in exhibition games.

The team was launched by Friends of Football in the tradition of the Corinthians, a team that played similar games in Auckland during the 1970s and 1980s.

Both the Corinthians and All Stars include many players who have represented their country and their aim is to inspire the next generation of international footballers.

Friends of Football’s objectives include promoting the sport, protecting its heritage and looking for ways to foster friendship.

Who plays for the All Stars

Jacob Spoonley (goalkeeper): All White who has also played for New Zealand at U-20 and U-23 levels. Clubs include Wellington Phoenix, Auckland City, Miramar Rangers and Forrest Hill Milford.

David Mulligan (midfield/right back): Made 28 appearances for the All Whites, and represented his country at U-17, U-20 and U-23 levels. Clubs include Barnsley, Doncaster Rovers , Scunthorpe United, Grimsby Town and Port Vale (all UK), Wellington Phoenix, Auckland City, Waitakere United and Hawkes Bay United.

Sam Jasper (defender/midfield): Played for New Zealand Knights in the A-League. He has played for the New Zealand U-16, U-17 and U-20’s teams, and at A International level.

Anthony Hagan (midfield): Played NZ Premiership for Waikato FC and clubs include Glenfield Rovers and Waitakere City with whom he appeared in the 2016 Chatham Cup final.

Liam Mulrooney (midfield): Former Auckland City midfielder who has played in the NZ Premiership, the OFC Championship League and at the FIFA Club World Cup.

James Debenham (midfield): Represented New Zealand at U-17 level and has played for clubs such as Forrest Hill Milford and Western Springs.

Friends of Football are grateful to Score Sportswear, distributors of the Lotto brand of football apparel, for helping make our All Stars kit possible.

The dark blue strip bears the Friends of Football logo and our players wear light blue socks as a show of our support for Blue September, the annual campaign by the Prostate Cancer Foundation of NZ to raise awareness of the need for men to test for the disease.

Our choice of light blue socks also serves as a tribute to our friend and Blue September campaigner Steve Sumner who lost his life to prostate cancer in February 2017.