Auckland’s football community is mourning the loss of long-time volunteer and administrator Ross de Wynter who for many years was a driving force behind the East Coast Bays club.
He died peacefully in Auckland on April 19, 2021, after a short illness. 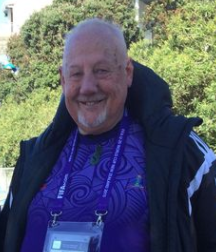 De Wynter filled many roles at Bays from his early association with the club when based at Mairangi Bay.
He filled almost every volunteer role at the club, ranging from club secretary to its unofficial historian and handling the Public Address system on matchdays.
‘First team match days will not be the same without him,’ says a tribute from the club on its Facebook page.
Though best known for his involvement at Bays, where he was a Life Member, he contributed his ideas and knowledge to other parts of the football community and he will be greatly missed by the sport.
A full service to celebrate Ross’s life will be held at East Coast Bays clubrooms, 54 Andersons Road, Browns Bay on Friday April 30, 2021, at 1 pm.