The northern football season is two-thirds completed so every competition has its share of ‘must-win’ games – and this weekend is no different.

If you’re looking for the games we’re picking to be the most entertaining, we suggest the following for football fans in the North:

With seven rounds remaining, the four qualifying spots for the National League are sorting themselves out, with Auckland City, Auckland United and Eastern Suburbs having skipped clear of the rest.

But four clubs are within a point of each other, battling for the fourth qualifying position, and every week is now crucial to their chances.

This weekend’s ‘six-pointer’ is at Seddon Fields under lights (5.30pm) when Western Springs host Melville United.

Hamilton Wanderers also have to pick up something from their trip to Auckland United’s Keith Hay Park (3pm) to stay with the leading bunch. 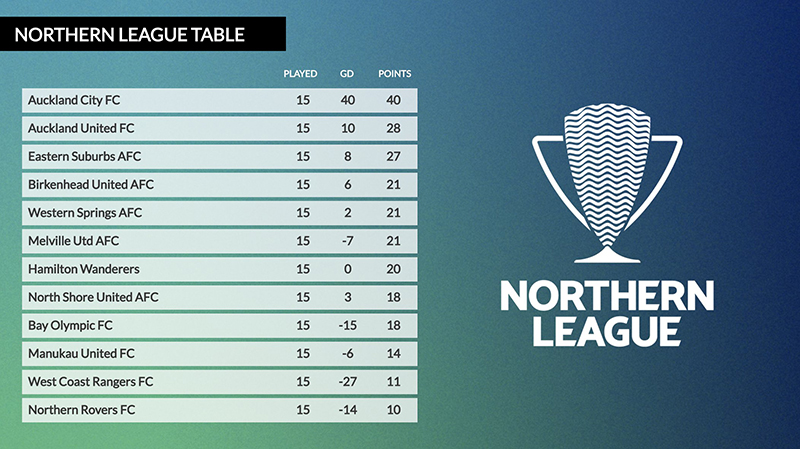 In Lotto NRFL Division 1, a mid-table clash between Mt Albert Ponsonby and East Coast Bays (3pm) at Anderson Park could be the entertaining game of the day. Both sides have been scoring plenty of goals and neither are in danger of relegation … so why not play with freedom and go for it?

Our pick of the day in Division 2 is the match-up between Fencibles United (2nd) and Beachlands Maraetai (3rd) at Riverhills Park (3pm). The winner will take an advantage in the race for promotion (the top two clubs go up) … the loser might find it difficult to stay with the leading bunch.

The women’s Premier League has two fixtures on Sunday.

Northern Rovers host the resurgent Hamilton Wanderers at McFetridge Park (11am) and there’s plenty of time to head to Keith Hay Park for the 1pm encounter between Auckland United and Eastern Suburbs.

United’s form has slipped since a strong start to the season but the women’s competition has seen a few form reversals this season … and we’re tipping this as a game that’s capable of an upset win by United.

Football enthusiasts are invited to a movie night at Bay Olympic’s clubrooms to watch a...