Memories of All Whites captain Steve Sumner continue to inspire efforts by those involved in the fight against prostate cancer.

Prostate cancer took Sumner’s life in 2017, at the age of 61, but he dedicated his final months to promoting awareness of the disease and encouraging middle-aged men to seek regular checks.

Friends of Football has actively supported the Prostate Cancer Foundation of NZ at the urgings of Sumner, knowing he leaves a legacy of service not only to his chosen sport but to the charity for which he became a national ambassador.

From the time of his diagnosis with advanced prostate cancer in September 2015, Sumner was determined to make the most of his life, and especially to promote awareness of the number one cancer in New Zealand men.

He announced his diagnosis publicly and agreed to become an Ambassador for the Prostate Cancer Foundation. In his many media appearances and statements, he always included an encouragement for men to “get tested” to avoid being in the situation he had found himself with a late diagnosis and incurable disease.

He said he was aware of at least four men who had heeded his encouragement and, after being tested, had been diagnosed with early-stage localized disease that would be treatable.

“Thankfully they can do something about it,“ he said.

Sumner became an inspiration to many fans, and fellow prostate cancer patients, as he sought to battle this disease. In speaking at PCCF’s national conference, he told the audience what it was like for him and his family. As on the football pitch, he led from the front and received a standing ovation from the audience.

His impact on prostate cancer awareness among New Zealand men and their families has been significant.

“He was always positive, always up for the fight when I spoke with him” says Graeme Woodside, CEO of the Prostate Cancer Foundation.

“He has been a great inspiration to me and our team to continue to promote awareness and provide support to the many men, and families, who are living with prostate cancer.” 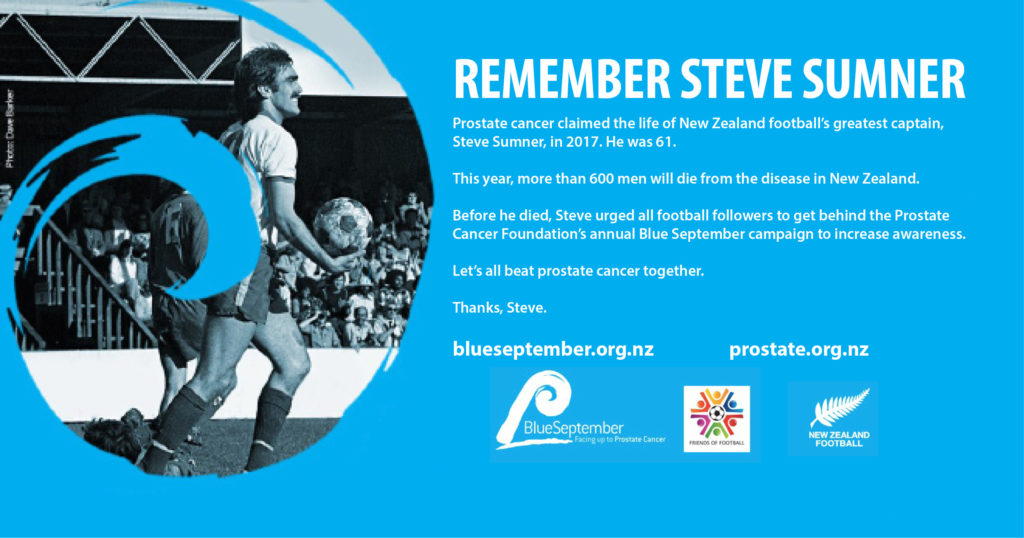 Click on the following link to learn more about protecting yourself from prostate cancer:

Sumner was awarded Friends of Football’s Medal of Excellence in 2015 for his achievements and contribution to New Zealand football.

Click here for Friends of Football’s tribute to Sumner >>>>